It didn’t end well. And, the worst part, the villian was a woman.

Lorraine Murphy, CEO of The Remarkables, was furious to receive a nasty reaction when she let another business woman know she was bringing her baby to a meeting.

As the founder and CEO of The Remarkables, Lorraine Murphy is no stranger to meetings around the world. Each year she travels to either the U.S. or UK to gain fresh insights from global markets that she can share with her clients back in Australia.

Her most recent trip was pretty different because she brought along her 12-week-old baby Lexi. She met with several people — none of whom had any issue with her bringing her baby with her.

Murphy, an expert in influencer marketing, told HuffPost Australia she set about booking in meetings with her existing UK contacts. She also reached out to some new people. She let everybody know that little Lexi would be coming too.

“One acquaintance replied to my LinkedIn Inmail saying she’d be very keen to meet, at which point we switched to email. We arranged a lunch date for the following week, and I let her know that I’d have my teeny sidekick with me. A few hours later, I received an email that was clearly destined for her assistant,” Murphy said. 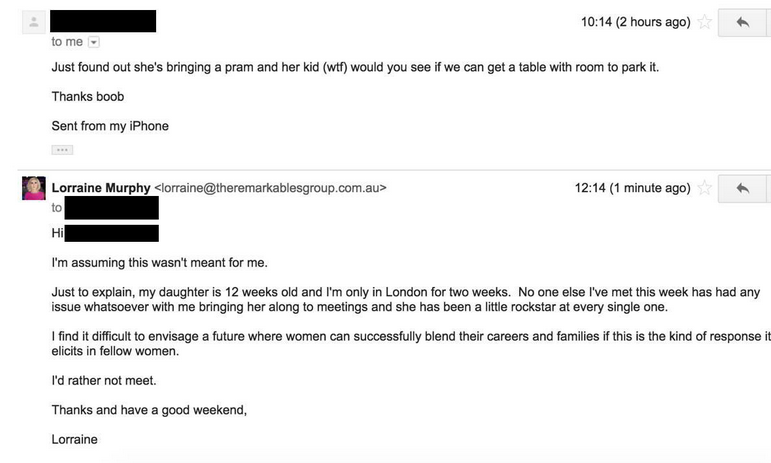 “Reading the email, I felt like I’d been kicked in the guts. I was deeply hurt. I was outraged on behalf of our little daughter.”

“And then I got angry. Really f***ing angry. I fired off an email response and ate some cake (a citron tart if you’d like specifics).”

Murphy then shared the exchange on her social channels, where she had hundreds of comments, shares and then 57,000 people saw her LinkedIn post. 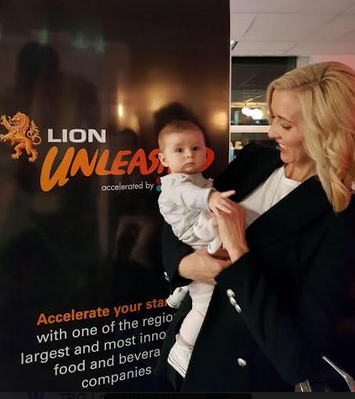 Murphy believes there is an element of trust that needs to come into this, that your child won’t be disruptive and prevent a productive, enjoyable discussion.

She would not expect anybody to attend a meeting if they’re being distracted by a cranky baby.

“Of course, that would be a complete waste of their time, and, quite frankly, mine as well. But I don’t believe that this should be a ‘women’s problem’. More and more parents are starting their own businesses, a life choice that I know from more than five years of experience places demands on every aspect of our lives,” Murphy said.

“Today is my husband’s day with Lexi. He is an entrepreneur as well, and I am so proud she is going to a meeting with daddy. In doing so, my husband is increasing visibility of men blending their businesses with their children.” 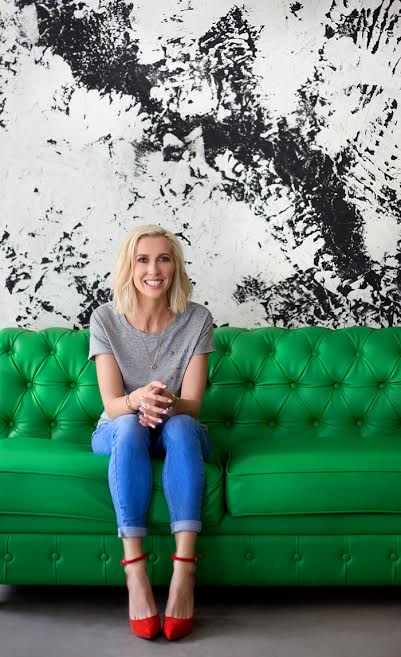 Lorraine Murphy believes the issue of having a baby at a meeting should not be seen as a ‘women’s problem.’

Murphy said the woman who wrote the email apologised and wanted to meet up to say ‘Sorry’ in person, but Murphy declined.

“The tone of the person who sent me that email was not, in my opinion, professional and sets the tone for the rest of their team,” Murphy said.

“We each have responsibility for our communication, and how we manage that speaks volumes about our values; personally and professionally.

“It’s tough running your own business. It’s arguably even tougher being a parent. Those who support parents in doing both should be commended and celebrated for doing so.”

Article can be viewed on HuffPost here